Since we have gotten so many requests for updates on this project with emails , we decided to do a formal article here .

Since the release of macOS 10.14 Mojave , Apple has basically required the use of certain metal capable AMD graphics cards in the classic Mac Pros to run the latest OS .  You might still get some mileage with a nVidia GTX 680 or Quadro 5000 Mac Edition here , but these cards are getting very long in the tooth and don’t pack the punch we’d like to see .

Apple provides AMD graphics drivers already built into the operating system , so it’s all plug and play .  And Apple has a qualified list of cards to be used in running Mojave on the ol’ Silver Towers , found here . But what happens if the performance of the recommended cards is lacking for your workflow ?

We know that the Vega series of GPUs run perfectly nice in Mojave and indeed every iMac Pro ever shipped has one of these marvels built in .  They’re the cream of the crop GPUs from AMD at the moment and the best one we can install in a cMP would be the AMD Vega Frontier Edition 16GB .  It has a Vega 64  processor and the greatest number of stream processors . 4096 to be exact .

A handful of pioneers have installed a single Vega card in the classic Mac Pros , but installation is tricky because of the card’s massive power requirements .  AMD says the TDP for these cards is 300 watts each and we’ve verified they are spot on with that statement when we’ve tested these cards at full load .

Each AMD Vega F.E. has two eight pin ( 150 W each ) booster power connectors and they will draw a total of just under 300 W when at full load .  So , don’t even think of using 6 pin mini-PCIe to 8 pin PCIe power booster cable adapters for this project in order to trick the sense pin into allowing the System to boot .  Just . Don’t . If you do use these adapter cables , you’ll damage your Mac .

But where can an installer grab that much juice to feed even one of these puppies safely ?  Even with all the tricks in our arsenal we’ve used building GPGPU macOS editing machines over the years , we’d have to say there is only two ways to safely install a single Vega with these machines : the use of an external PSU to feed the card’s booster power connectors or to go whole hog with the project and tap the cable of the internal factory 980 W PSU to do the same .

You might get away in the short run grabbing booster power from various internal connectors ( e.g. the two 6 pin mini PCIe backplane board connectors , the HDD Bay SATA backplane connectors , the ODD SATA power connectors , etc .). But if not done correctly , when such a high performance card like a Vega is placed under full load continuously ,  PCB traces will eventually burn out and there is always the danger of a case fire .

With all that said ( just to properly scare you ) , we used an external power supply unit to feed a pair of AMD Vega F.E. cards in our cMP test machine and to be honest , we got some awesome results running in Mojave . In fact , we took the blue ribbons .  Some of our results surpassed the performance of even an iMac Pro being used with the addition of a Vega eGPU ( for a total of two Vegas being used by the iMac Pro system ) .

That’s some serious firepower and is one of the reasons why we just adore our aging Silver Towers .  How did this happen ?  Simple .  Provide direct bus connections for the GPUs and the lack of thermal and performance ( supplied power ) throttling that is unique to these macOS Systems .  In short , keep everything cool and give all the components all the juice they require .

If it looks like a black and red squid is attacking our Mac , well …

And here is what it looks like on the inside : 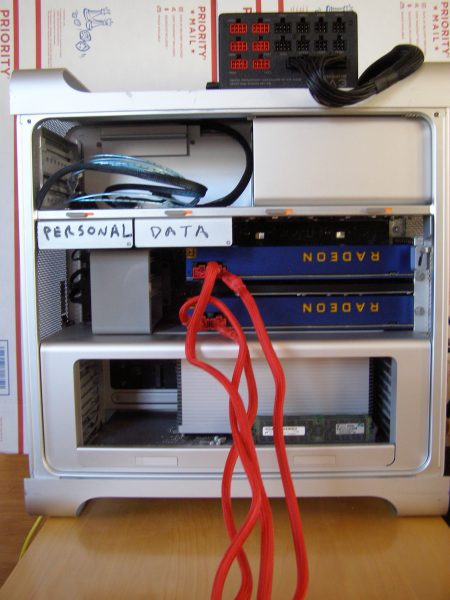 We’re able to have all these hot and high performance components tightly packed together for only one reason – they stay cool under load .  And they stay cool because everything is busy pushing hot air directly out of the System . That’s due to the blower type coolers of the graphics cards .  If they had instead the open air type of cooler , they would shoot out hot air right back inside the Mac and there would eventually be a performance or durability problem .

Here are a few initial results : 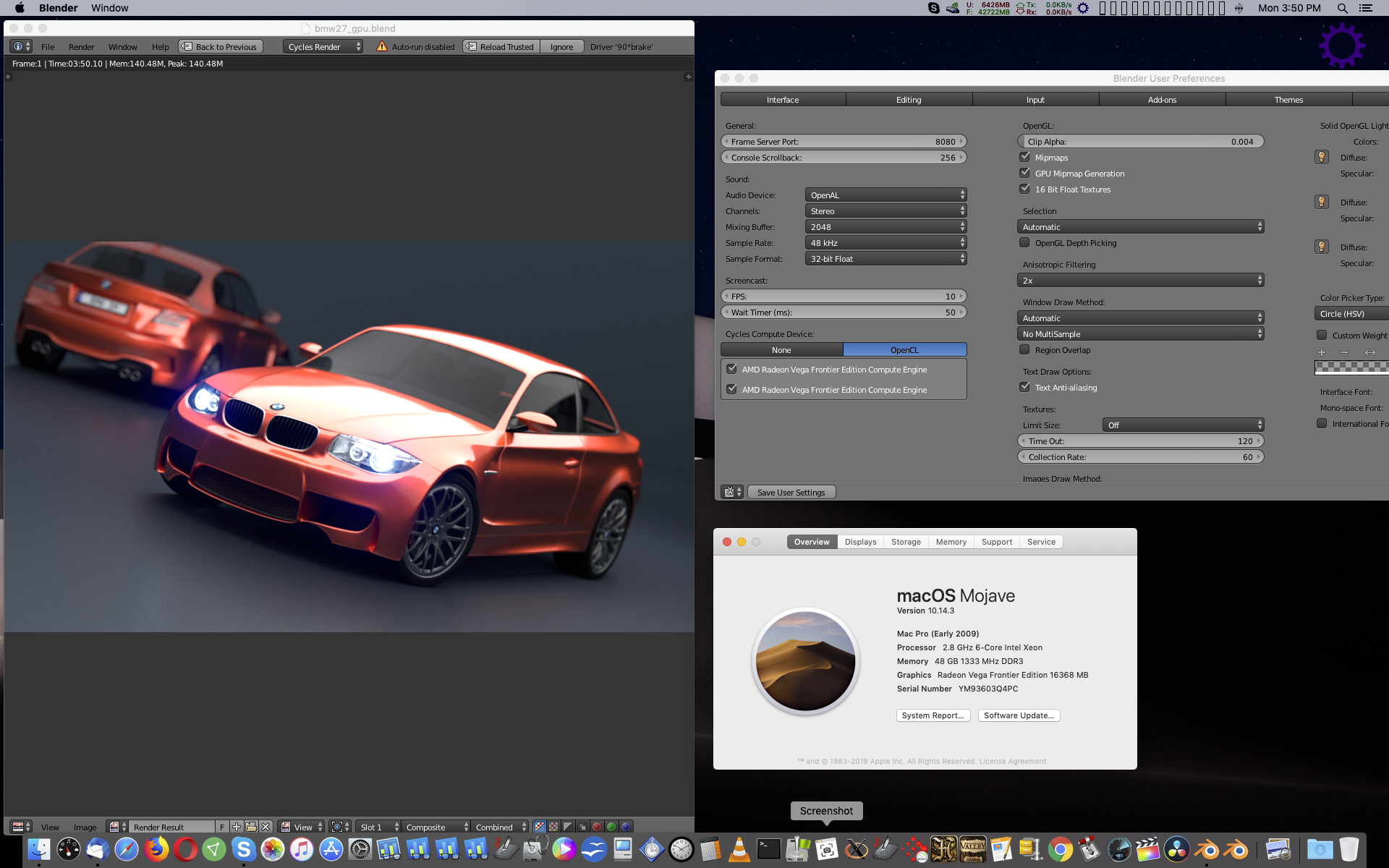 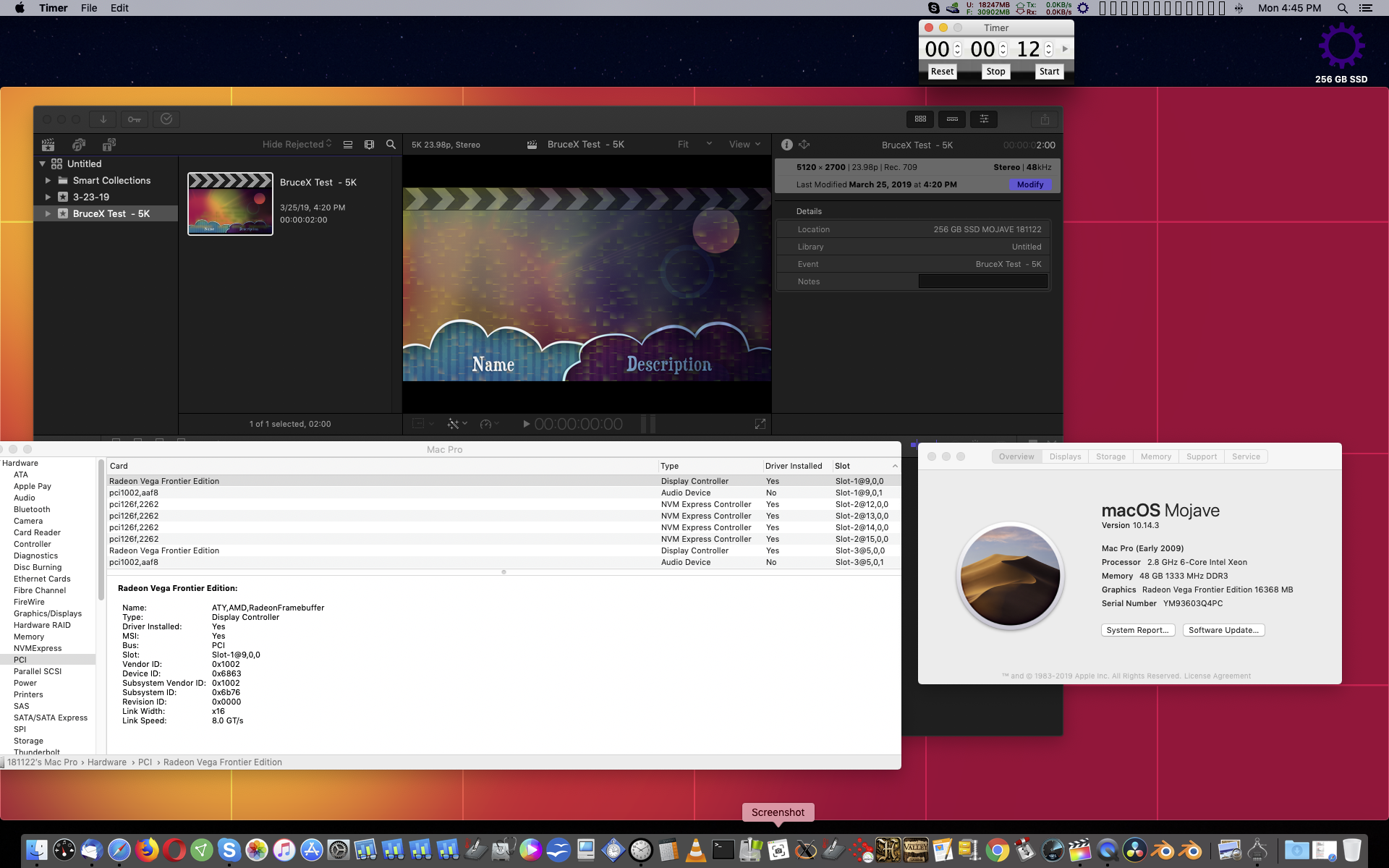 And just for fun , the benchmark for our flash RAID array for the project writes : 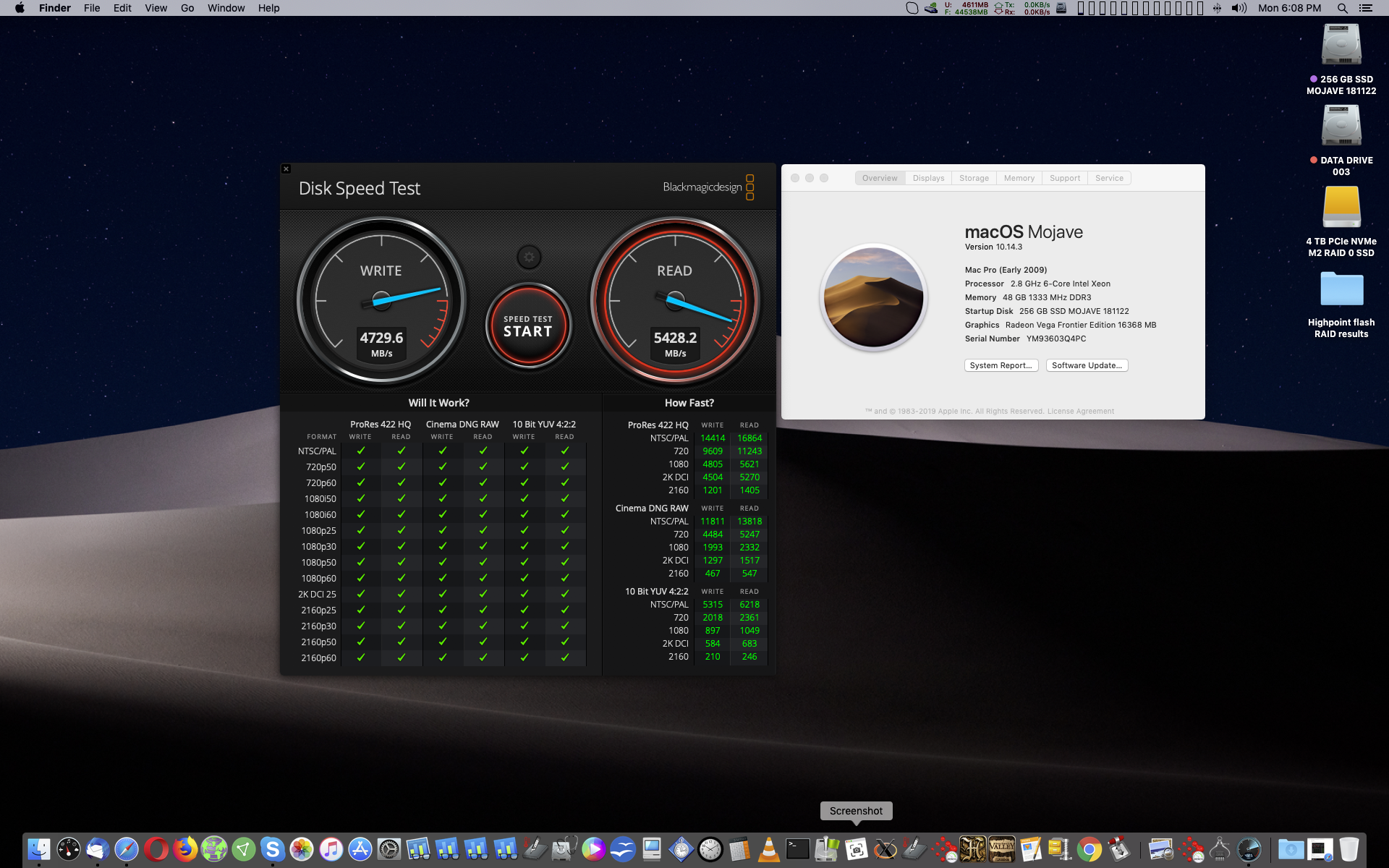 These benchmark scores are literally higher than any current Apple computer , running in Mojave .  It’s amazing what can be done with an ancient architecture , that’s so good it still is used as a preferred editing configuration .